Discovering Discovery Cove, an exclusive gem among the many options in Orlando! 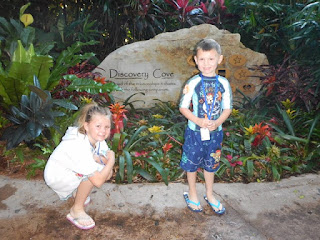 Located just minutes away from the hustle and bustle of the Orlando theme parks is the tranquil oasis known as Discovery Cove.  I stumbled upon information on Discovery Cove while researching Sea World, which owns Discovery Cove, and couldn’t believe I’d never heard about it before.  After having the pleasure of visiting recently, now I know why no one wants the secret of Discovery Cove to get out!

Discovery Cove is an exclusive, island retreat; an absolutely amazing departure from the crowds and “go-go-go” mentality we often have when visiting Orlando theme parks.  It truly felt like we were on a secluded island while we were there, and it was hard to believe at times that we were still in Florida!  But before I get into our experience, let me first give you the basics….

Cost: Pricing varies by date and by package.  You can purchase the resort package or the dolphin swim package (which has all the benefits of a resort package but also includes a 30 minute interactive dolphin encounter).  Pricing for the date we attended (May 29, 2016) was $199 for the resort package and $289 for the dolphin swim (pre-tax).  The SeaVenture experience (a 20 minute underwater walking tour) is an additional charge, starting at $49 per person.  Note that there is no separate child pricing available, as all guests can participate in all park activities, though children 2 and under are admitted free. As Discovery Cove limits attendance to approximately 1,300 guests per day, advance reservations are highly recommended.  You are also permitted one complimentary “date change” should your travel plans change, or in the case of inclement weather - and as all activities are outside, you’ll want to watch the weather report closely as your date arrives!  Private cabanas are also available for the day, at an additional charge.

What’s Included: Your reservation price includes breakfast and lunch, as well as unlimited snacks and beverages (both alcoholic and non-alcoholic) throughout the day.  You are also provided with a free wet suit or vest (which must be worn during all water activities), free snorkeling gear, and free towels and locker rental.  Animal-friendly sunscreen is also available at no charge.  Finally, your Discovery Cove ticket also grants you free admission to both Sea World and Aquatica at any time during the 14 days surrounding your reservation.  Current pricing for Sea World is $79/ages 3+ and current pricing for Aquatica is $48/ages 3+ (a 2-day ticket is also available for $99/ages 3+, which allows admission to both parks).

My entire family agreed that our day at Discovery Cove was the best day of our 8-day trip.  Though pricey (total cost of tickets purchased was $946.28), we would have spent at least $100 on food and beverages during the day at a theme park (probably closer to $200!).  Plus, factor in the free admission to Sea World (where we had already planned to go, so saved us $316), and now the “cost” of Discovery Cove was under $500.  Given the low crowds and amazing experiences, this is something we would definitely do again.  Read on to hear all about our day! 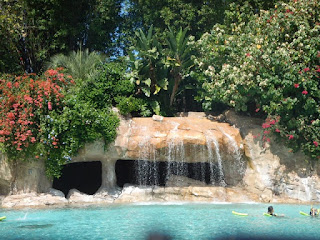 Our traveling party for the day was myself, my husband, our 7-year-old daughter and our five-year-old son.  We arrived at Discovery Cove around 7:30 and were the 3rd or 4th family in the check in line.  There were perhaps a half-dozen employees working the check in counter, so the line went quickly.  At check in, all members of your party are photographed and the photo is placed on an identification card connected to a lanyard.  The lanyard provides admission to all areas of the park, and also included a map for ease of navigation.  My daughter and I had purchased the dolphin swim package, and were assigned our encounter time at check in.  Ours was 8:40.  We were fine with that, and had actually hoped to do it early, so I don’t know if you could request a different time than what you were assigned.  Our dolphin encounter time got printed on our card for reference, and my husband’s and my card also indicated that we were over 21 (after an ID check, of course!).

After check in, an employee takes a complimentary photo of your family at the park entrance (this photo gets placed in a keepsake folder that you can pick up when you leave).  Then you are left to explore on your own.  Since it was nearly 8:00 at this point, we headed directly to Laguna Grill for breakfast.  The meals are served cafeteria-style, with two serving lines available (though I’m not sure everyone realized that, as the right line was always shorter!).  Breakfast offerings consisted of fruit, pastries, bacon, sausage, eggs, potatoes, French toast, yogurt and cold cereal.  There was also a selection of juices, milk, pop, water, tea and coffee at self-service stations outside.  Plenty of outdoor seating was provided, some under cover and most with umbrellas for shade.  All of the food was hot and fresh, and had my dolphin swim not been in a half-hour, I could have easily eaten more!

We were asked to arrive to our dolphin swim ten minutes early, dressed and ready to go, so my daughter and I headed immediately to the locker rooms after breakfast.  We got fitted for our vests and made our way to the check in point.  We were divided into four small groups (less than a dozen participants each) and after signing our waivers and watching a short video, made our way to the beach.  Each group had its own dolphin (ours was named Hutch) and separate area of the cove for their encounter, so there was plenty of room for everyone.  We never felt crowded, and the small group size ensured that we all got plenty of one-on-one time with our dolphin.  My husband and son (who were not participating due to my son not being of age) were permitted to stand behind a glass wall to watch our encounter and take pictures.  While Discovery Cove did have their own professional photographers in the water with us for the “posed photos,” my husband was able to capture so many candid shots of our experience!  The staff was extremely accommodating, and made sure my “paparazzi” had a good view of my daughter and me at all times. 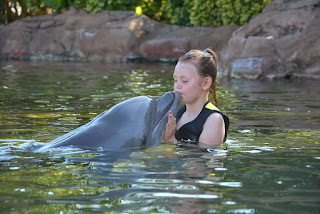 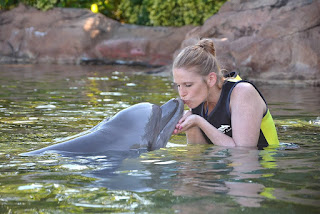 After getting acquainted with Hutch, watching him do a few tricks and learning a few signals to get him to perform, we were each offered the opportunity to do a dorsal fin tow ride.  The ride starts from water that is approximately 14’ deep, so you will be required to tread water until the dolphin arrives for your ride.  However, there is the option of a shallow water experience for any non-swimmers or younger members of your party.  (My daughter was determined to do have the full experience, but did struggle a bit to stay afloat waiting for her turn.)  After the dorsal fin tow ride we gave Hutch hugs and a rub down, and finished the experience off with a kiss.  It was one of the most amazing things I had ever experienced!  The entire process (from watching the training video to viewing your pictures afterward) lasted approximately an hour and a half.  At the conclusion of the experience you are offered the opportunity to purchase a video of the entire encounter, copies of individual pictures, or a thumb-drive containing all pictures taken during the day (additional photo opportunities are available throughout the park).  As this was an experience I wanted to remember forever, I opted for the thumb-drive.  Cost was $159.75 (including tax). 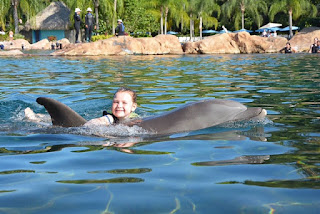 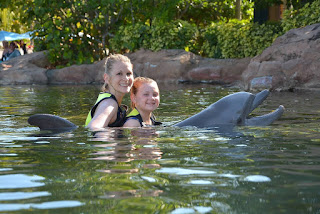 After the dolphin encounter, my entire family took a trip down Wind-Away River, a slow-moving current that surrounds the park.  The water depth goes up to 8’ at points, but life vests and pool noodles are available (at no cost) to keep you afloat.  Wind-Away River is everything you’d expect from a “lazy river” with waterfalls and beautiful scenery.  We were one of few families enjoying it at the time (and after spending a day at Blizzard Beach earlier in the week, where 90% of my time in the lazy river was spent with a stranger’s foot in my face!), the lack of crowd was a welcome change of pace!

Next we stopped into the Aviary, where the birds literally eat out of your hands! You are given a small bowl of food, filled with fruits and berries, then asked to stand still.  The birds perched on our hands, our arms, our shoulders, even our heads!  It was truly amazing and my daughter may have enjoyed it more than the dolphin encounter!  We probably spent an hour feeding the birds in the aviary. 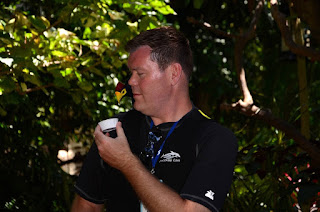 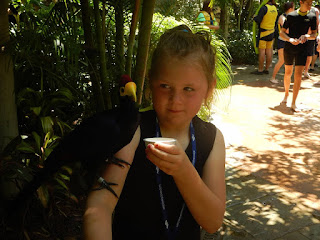 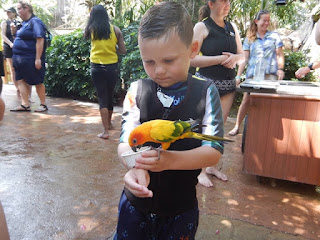 Upon exiting the Aviary, we made our way back to Laguna Grill to refuel.  Lunch consisted of burgers and pulled pork sandwiches, pasta, fish, salads, cold sandwiches and a selection of desserts.  For the kids they had hot dogs, chicken tenders, fries and macaroni & cheese.  The same outdoor seating was available and remained plentiful.  Also available at several booths throughout the day were multiple snack options – chips, soft pretzels, chocolate chip cookies, pop, beer, wine and frozen beverages (both alcoholic and non-alcoholic).  My kids may have drank their weight in lemonade icees!

After lunch we decided to explore the salt water Grand Reef.  We grabbed snorkeling gear on the way (your get to keep the snorkel!) and made our way to the far end of the park.  Water depth in the Grand Reef ranges from 1-12’, so it was great for all ages.  My son couldn’t quite master use of the snorkel, so he and I stayed in the knee-deep water of the reef, watching the fish swim around our ankles.  There were many varieties of tropical fish and sting rays, which my son loved “petting” as they swam by!  My husband and daughter ventured into the deeper waters, where they were able to view the fish up close, and were also able to watch the reef sharks (from behind glass, of course!).

Around 4 o’clock a storm started rolling in, so my son and I collected our belongings while my husband and daughter did a final loop on Wind-Away River.  The kids filled up one last frozen drink for the road, and we stopped to pick up our complimentary photo and thumb-drive on the way out.  Walking out of Discovery Cove I felt more relaxed than I had in MONTHS, and definitely more relaxed than I have EVER been during a vacation in Orlando!  If you are in the area, this hidden gem is not to be missed…..just don’t tell too many people about my new favorite tropical getaway!!


Let us make your vacation even easier!  We'll help you plan from the start and can advise you and handle your arrangements, including dining, fast passes, room requests, discount application, and celebrations.  We are the same price or less than if you book on your own, and you get us for FREE!  Have an expert on your side at zero cost to you and contact one of our agents today!