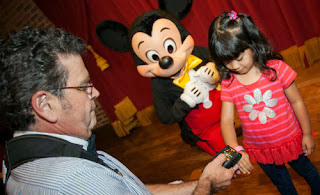 In conjunction with the new website, Guests now have the ability to touch to associate their photos directly to their My Disney Experience account using MagicBands or RF-enabled cards, such as Key to the World cards or theme park tickets. This functionality is currently only available with photos taken by a roving Disney PhotoPass Photographer. 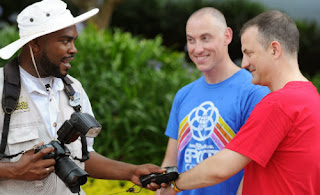 The existing Guest Assistance Card (GAC) program is set to be discontinued and replaced with a new system on Wednesday, October 9th at Disneyland and DCA. The existing Guest Assistance Card will cease to exist on October 9th.
In its place will be an entirely new program called the Disabled Assistance System (DAS). The DAS will work similarly to the “return passes” issued at popular rides like Star Tours 2.0 and Radiator Springs Racers, where currently a GAC holder gets a Fastpass-style return time hand written on a card based on the current Standby wait time. But with DAS, that concept will be rolled out to several dozen high-wait attractions in Anaheim. Instead of going to the actual ride to get a return card, a DAS holder will report to one of several Guest Relations kiosks that will be set up around the parks, with a current plan to have four kiosks in Disneyland (Fantasyland alone gets their own kiosk) and three kiosks in DCA. The DAS holder will present their card and tell the Guest Relations CM which attraction they want to ride, the CM will look at the current wait time via the official Disney Mobile Magic app on an iPad, and will then write out a return time for that attraction and subtract 10 or 15 minutes to make up for the travel time to and from the kiosk.

Only one ride reservation on a DAS card can be made at a time, so if the current wait for Space Mountain is 60 minutes and your return time is written for 45 minutes later, a DAS holder will not get another return time printed on their DAS until the first one has expired. A person with a DAS card could go and do anything else in the park in the meantime; watch a parade, see a show, have lunch, go on low-wait time attractions, pull a regular Fastpass for any other attraction, etc. But only one ride time can be reserved at a time with DAS, unlike the existing GAC which serves as basically an open Fastpass for any Fastpass lane in the park or an access card to go up the exit on any other type of attraction. The DAS changes that quite dramatically.

The DAS cards will be issued only at Guest Relations offices in both parks, and the DAS kiosks are only for checking in for a specific ride. There will be no different stamps on the DAS like the current GAC with its half dozen stamp codes; you will either be issued a DAS or you will be instructed to use a wheelchair or other aid for your mobility issue. DAS will only be issued for one day at a time, although folks who can prove they are staying at a hotel for a few days could get a DAS dated for a short length of stay.

The person who is disabled and who has the DAS issued to them will also have their digital photo taken at Guest Relations, and the photo will be printed on the front of the DAS card and used by CM’s at the attractions to confirm that the DAS holder is actually going on the ride. The photos will prevent a current form of abuse, whereby one member of a party gets a GAC issued to them but then insists to the CM’s that they don’t want to ride they just want their children or friends to go in through the exit and skip the line while they wait nearby on a bench. Or worse, children or others in the party are coached into telling the CM’s that they are the person listed who was issued the GAC. To use a DAS, the person the DAS is issued to must be present at the kiosk and at the attraction and must go on the ride for the DAS privilege to work for the rest of the party.

There are more radical changes in DCA, where all queues and park facilities meet ADA requirements for wheelchair accessibility. In DCA, a person in a wheelchair or ECV won’t receive any extra courtesies or services beyond those visitors who are not in a wheelchair. People visiting DCA in wheelchairs likely won’t qualify for a DAS, and will now experience the park as everyone else does, including waiting in Standby lines and juggling Fastpass return times. The task of implementing that culture change will be more intense in Anaheim than Orlando as there are currently 55 attractions at Disneyland Resort that use a ride vehicle, and about 35 of those have wheelchair accessible queues. Comparatively, there are a total of 46 attractions at Walt Disney World’s four parks combined that use a ride vehicle, and 38 of those have wheelchair accessible queues. There are more rides overall at Disneyland Resort compared to WDW, and more of them in Anaheim are not wheelchair accessible.
At Disneyland Park there are 20 rides that have been identified as non-wheelchair accessible, and at those 20 rides an accommodation of going through the exit or a Fastpass lane will be offered to those in wheelchairs. A person in a wheelchair doesn’t need a DAS to get access at those attractions, thereby limiting the issuing of DAS cards in that park. Disneyland’s operations teams are studying ways to restore the wheelchair accessibility designed into the queues of some newer rides, like Indiana Jones, to allow a DCA-style equity to exist at as many Disneyland rides as possible. It should be noted that the work implementing DAS, which has had lots of executive involvement from both coasts, has now generated serious discussion in TDA on creating a five-year plan of capital expenditure to go in to those older rides and retrofit them with wheelchair accessible queues. But that’s still a few years away.

The goal behind DAS is to still offer service to those who may need it, but to also eliminate the wild excesses of the GAC system which operated on most days and on most rides as an unlimited Fastpass card and/or a backdoor pass to slip in via the exit with a much shorter wait. The one exception to the DAS program is made for Make-A-Wish children. A new Genie lanyard has been created for Make-A-Wish children that will act like an unlimited Fastpass and instant backdoor access card (basically the same thing as the current GAC with the “green light” stamp on it), and it will be sent to the families just before their visit directly from the Make-A-Wish headquarters in Phoenix. The Make-A-Wish cards won’t be kept on Disney property, at the specific request of Disney to avoid any ability to use that courtesy for anyone other than qualified Make-A-Wish visitors.

Guest Relations and Attractions Cast Members in both parks have already been scheduled classroom training for the DAS program through late September and early October. The Guest Relations team will get the most intensive training day, as they’ll be on the front lines of this new system as they try and reel in expectations of Annual Passholders used to having a GAC with easy access to any ride they wanted. Staffing for Guest Relations is being beefed up as much as possible beginning with roll-out day on Wednesday, October 9th, and the Security department has also been asked to help staff officers in Guest Relations centers in Disneyland and DCA to help with anyone who may get verbally abusive or threaten violence against those Guest Relations CM’s doling out the more restrictive DAS cards.

Take a Romantic Trip to Epcot


By Travel Time Agent Heather
You’re probably thinking “Epcot? Romantic?” YES! Take it from me! My husband and I just celebrated our 5 year anniversary at Epcot. What better place for a date then Paris at night, with the Eiffel Tower twinkling as a back drop, the beautifully illuminated fountains, and the quaint walkways and beautiful windows.  Stop in at Boulangerie Patisserie for wine and pastries, because nothing says romance like chocolate and wine! Take your wine with you stroll through the city and find the perfect spot to watch the spectacular fireworks of Illuminations.  If you’d like to also stop for dinner the upscale Bistro de Paris has an outstanding view from the 2nd floor, but please note there is a dress code for this dining experience.