This is the Dessert Party you’ve been looking for….. 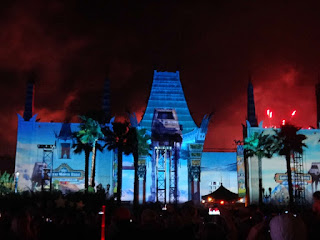 Star Wars: A Galactic Spectacular debuted in Hollywood Studios on June 17, 2016.  Since its opening, it has been touted as one of the best nighttime shows in Walt Disney World history, by both Star Wars fans and non-fans alike.  The 12 minute show features fireworks, lasers, light projections and other special effects set to Star Wars-themed music, and combined with iconic characters and scenes from throughout the saga.  The best area to watch the show is in front of the Chinese Theater, ensuring you have a good view of both projection towers on either side of the building.  Note, however, that these spots are often scoped out 60-90 minutes in advance, especially now that the show is no longer running nightly (the show is currently only being offered on Monday, Wednesday, Friday and Saturday nights after running daily during the summer months).  If sitting on the pavement for an hour and a half doesn’t suit your fancy, consider booking the Galactic Spectacular Dessert Party, which is offered every night that the fireworks are presented.

The party is scheduled to begin an hour and 15 minutes prior to the start of the fireworks, though you are often allowed entry up to 15 minutes prior to the official start time.   The party is held inside Launch Bay, and will run you $69 /adult and $39 /child, which includes tax and gratuity, and is paid at the time of booking (though cancellations can be made up to 24 hours in advance for a full refund).

Party offerings include both sweet and savory food items, in addition to unlimited beverages (both alcoholic and non-alcoholic).  Additionally, each participant will receive a souvenir Chewbacca stein.

There are cast members stationed outside Launch Bay to check you in and provide you with your party credentials (a lanyard).  The dessert party itself is located inside Launch Bay, just past the character meet and greet area.  There were several long tables set up with the food on one side of the room and high top tables (no chairs) located on the other side.  We had no issue finding a table inside on a sold out night, but there are also additional tables set up outdoors if needed. 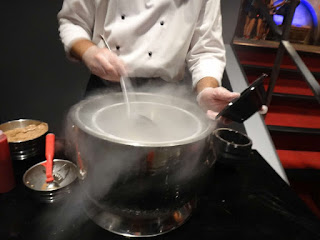 As mentioned, the buffet includes both sweet and savory items.  In the interest of research, I wanted to try a bit of everything, but it was just too much!  Savory items included black bean dip and roasted red pepper hummus with flatbreads for dipping.  There were also cheese and olive skewers, which my husband loved, as well as tomato and mozzarella skewers.  My son ate his weight in fruit skewers (there were both grape and watermelon options), while my daughter and I preferred the sweets.  Dessert offerings included Darth Vader, R2D2 and BB8 cupcakes, a red velvet brownie (themed to Darth Maul), stormtrooper and Darth Vader shortbread cookies, blue panna cotta, rice krispie bon bons and Mickey Bars, available upon request.  But perhaps the most amazing treat was the freeze-dried Nutella truffle!  Served with your choice of either chocolate or raspberry syrup, it was my personal favorite. 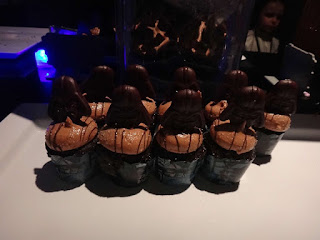 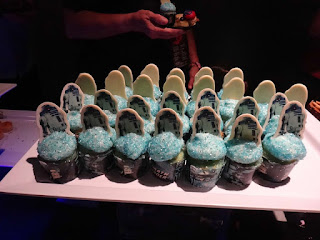 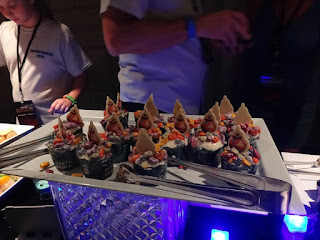 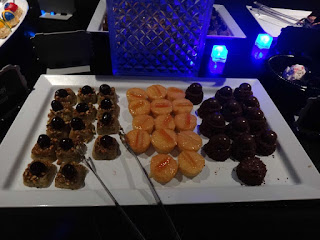 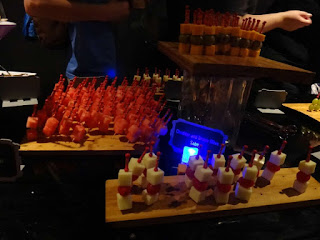 In addition to water and soda, the party offers 4 specialty alcoholic drinks, all of which my husband and I found too sweet for our liking.  The Light Speed Margarita was the least offensive, with the Galactic Punch a close second (POG juice with 2 varieties of rum and a mango syrup).  There was also a Cosmic Citrus Twist (citrus vodka and watermelon lemonade) as well as Swamp Milk (vodka, melon liqueur, vanilla syrup and half & half).


Launch Bay remains open during the party, so you are free to explore all areas of the building, including the meet and greets with Kylo Ren and Chewbacca.  Approximately 15-20 minutes prior to the start of the show, party-goes will receive a Stormtrooper escort to the reserved viewing area.  The viewing area does have a designated wheelchair / ECV location at the front of the area, and younger children are often allowed to join this area if it is not filled prior to the start of the show. 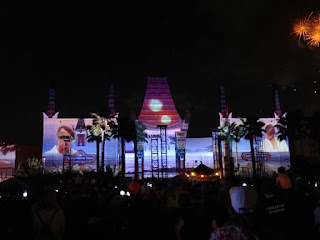 Tip for those with small children if you do not want to be separated during the show: Head out to the viewing area 5-10 minutes prior to the Stormtrooper escort for a spot along the rope.  This will ensure that your children are still able to see the show in its entirety, with you standing directly behind them.  When the Cast Members invite children to join the wheelchair viewing area, the invitation is for children ONLY, not their parents (though they will ensure that no child is allowed to leave the viewing area and will wait for the parents to retrieve them at the conclusion of the show).  Our group (which included 2 children) left the dessert party a half hour prior to the scheduled showtime and had no problem getting a spot at the front of the viewing area.

Upon checking into the viewing area, we received our souvenir Chewbacca stein, and there were cast members in the back of the area distributing water and soda.  We were also allowed to bring drinks from the party into the viewing area.  The view from this area is arguably the best possible spot to be in for this show.  A bit left of center, but with a perfect view of the Chinese theater and the 2 projection screens on either side.  The majority of the show is projected onto the front of the theater, so a viewing spot with a good view of the theater is a must for this presentation. 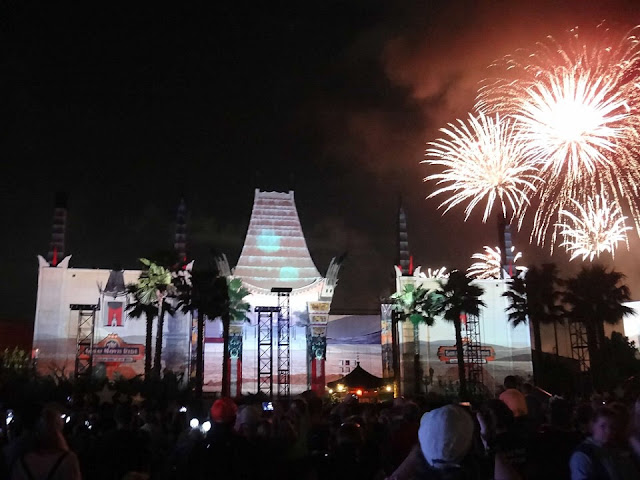 The fireworks and dessert party are currently scheduled through November 12, 2016, at which time it will take a brief hiatus to make way for Jingle Bell, Jingle BAM!, a new show that will be offered nightly at Hollywood Studios during the holiday season.  However, Star Wars: A Galactic Spectacular is scheduled to return on December 31, and it is expected that the dessert party will continue to be offered into 2017 as well.  Disney has been very slow to release updates to the entertainment schedule in recent months, so check back often for updates if you will be travelling after the first of the year.

Let us make your vacation even easier!  We'll help you plan from the start and can advise you and handle your arrangements, including dining, fast passes, room requests, discount application, and celebrations.  We are the same price or less than if you book on your own, and you get us for FREE!  Have an expert on your side at zero cost to you and contact one of our agents today!